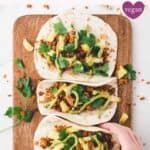 Vegan tacos al pastor are super tasty and perfect for every taco lover. They are filled with Mexican seasoned vegan taco meat made with cauliflower, walnuts, chipotle and spices. The authentic Mexican toppings like homemade guacamole, pineapple, and cilantro give these tacos a fruity and juicy taste.

What Are Tacos Al Pastor?

One of the most traditional Mexican tacos. They are typically made with spit-grilled meat, pineapple, cilantro, and guacamole. Let me show you how to turn one of the most common Mexican dishes into a mouthwatering vegan meal.

How To Make Vegan Taco Meat

Recipe Variations: Chipotle gives your taco filling a unique taste. However, if you don’t have it, you can substitute it with another chili (sriracha, sambal , chili powder).

If you don’t own a food processor: Chop the nuts and cauliflower using a knife. Mix well with the spices and transfer to the baking dish. 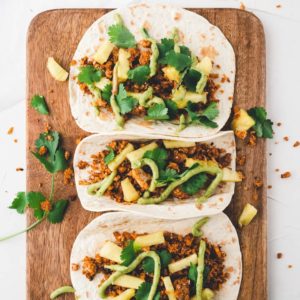