One of the quickest vegan nachos recipe ever! These nachos are loaded with veggies and a good dash of vegan nacho cheese sauce!

Honestly, once you start serving those veggie nachos, chips and peanuts become boring!

Nachos are one of the most loved finger food at any party!

Especially this recipe shows you how to make quick nachos which are prepared within minutes.

As they are so delicious, you never have to deal with leftovers! They are too tasty not to want to finish them until the last crumb is gone!

I also love to serve them for movie nights with friends and family, or date nights (don’t go wild with the onions….). They also make an excellent snack for Game Days or Superbowl!

What Are Nachos Anyway?

Nachos are a truly Mexican invention. Wanting to use leftovers in a creative way, Nachos Especiales (a Mexican guy back in 1943) invented the Nachos.

Nachos are usually served with a topping of chili con carne, black bean paste, and lots of cheese. Before serving, they are baked in the oven until the cheese has melted. The rule is that you must eat nachos using your hands! They make such an excellent finger food!

The authentic recipe, as you can imagine with lots of cheese and ground beef, isn’t suitable for a plant-based diet. Therefore, I am going to show you my preferred way to serve loaded vegan Nachos with only plant-based ingredients.

The base is always tortilla chips! Then comes the toppings, and that’s where you can get crazy-wild. I love to use avocado, tomatoes, shallots, jalapeños, and coriander.

Last but not least, you must drizzle them with a vegan nacho cheese sauce, which adds flavor and creaminess! Only this last step truly makes those fully loaded vegetarian nachos perfect!

It’s not easy to find a nacho cheese sauce that doesn’t contain cheese. At least not in this country I live in.

BUT, here comes the solution to all your plant-based cheese sauce problems: Vegan Queso!

Try out my recipe to make a truly indulging vegan queso! The recipe is so easy to prepare with only a handful of ingredients. Vegan Queso mostly consists of cashew nuts and nutritional yeast.

And let me tell you, not only can you use vegan queso for nachos, yet it also tastes fantastic with wraps, burritos, tacos, and much more. So please, give it a try.

If you are lazy, watch out if you find a purely plant-based nacho cheese sauce in your supermarket or online.

The toppings used in the recipe are my favorite toppings to serve with nachos. But there are no rules. Go crazy and use whatever toppings you love.

Here are some ideas of the best veggie nacho toppings:

→ Check out the recipe video. See how to make those loaded nachos in less than a minute!

Nachos are usually spread out on a baking sheet, topped with cheese, and baked in the oven until the cheese has fully melted. But since my vegan nacho cheese sauce is already creamy, this step is obsolete and turns this recipe in a very quick one. You can either serve them cold or, if you prefer, warm.

Here are three different ways to make them:

More Vegan Recipes You Will Love:

Did You Try This Recipe? 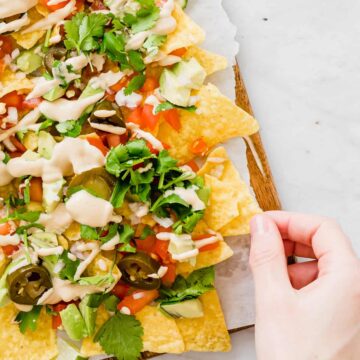